A pulse on what’s happening in education and retirement

Educating Educators: A short video with CTA President, E. Toby Boyd, on why the CTA Retirement Savings Plan is a smart choice for educators. 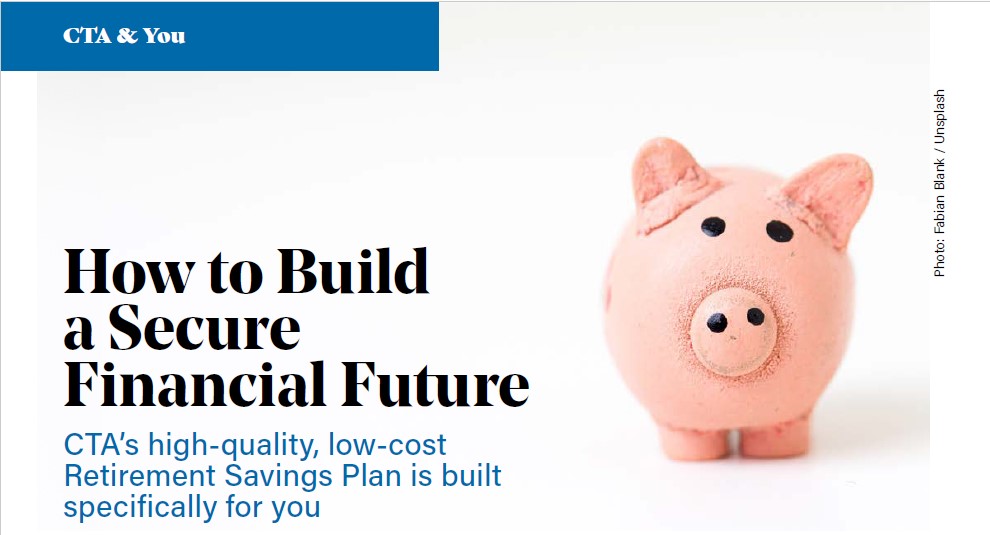 Did you know that the CTA Plan was featured in the December 2020 - January 2021 issue of the Educator magazine? If you don't already know about the CTA Plan, click on the below link to read the informative article and learn how the CTA Plan can help you achieve a long and happy retirement.

Jan 16, 2020, 08:20 AM by Greg Smalter
We’re featuring stories from CTA members about how they’re saving for retirement. Find out what mistakes people have made, what’s working for them, and things they wish other people had told them along their retirement savings journey.

We’re featuring stories from CTA members about how they’re saving for retirement. Find out what mistakes people have made, what’s working for them, and things they wish other people had told them along their retirement savings journey.

Over the past few years the issue of high fees in 403b plans has become a national topic. Recently ,Keith Reed, a teacher from Morongo Unified, was featured in a piece by the Wall Street Journal.  Keith has been a teacher for twenty-eight years and his wife has also been a teacher at various times over the years.

We picked up the conversation with Keith to hear more about his retirement savings journey and his advice on finding the right balance between saving and living expenses during the early years.

Why did you start saving for retirement?

When I first started out as a teacher, I looked at the pension plan to see how much we would get when we retired. I realized that it was only going to be about half of what we would need to live on.  It wasn’t going to be enough so we decided to start putting a little bit away every month.

I didn’t know much about saving and investing and these guys would come into the lunchroom and talk to us; they’d bring pizza and it seemed like they had all the answers. I assumed that that the people coming in were vetted by the district, so they’d be good guys. I started saving in an annuity I thought it was the right way to go.  It seemed like a good idea at the time because we didn’t know much about investing.

When did you realize that the plan you selected maybe wasn’t a good plan?

We were saving a little bit each month into our annuity and then we started hearing things about high fees in retirement plans, so we began looking at what we were paying. It was really hard to figure out; they don’t make it easy. I started speaking to a friend who is a teacher and also an investment advisor. He said I was paying way too much for my annuity and that he could get me set up with less expensive investments. I trusted him and we moved all of our investments over to him.

We were doing that for a while and then I attended a CTA conference and learned more about fees. I decided to ask my friend, the advisor, how much we were paying. He wouldn’t tell me. I couldn’t get the information from him. It isn’t easy to figure out how much you are paying. Eventually we did figure it out, and I was shocked. He stopped returning my phone calls and stopped communicating with me.

What did you do?

This all happened before CTA Retirement Savings Plan was launched. If it had been available, then I would have used it. They make it so easy and they are looking out for teachers. But it wasn’t available, so I used CALSTRS Pension 2.

What do you wish someone would have told you when you were starting out as a teacher?

I would say every time you get a raise, increase the contribution to your retirement fund. You can still enjoy life, but you will need that money in the future, and you will thank yourself.